I’ve not been posting about Revolutionary Poets lately, because I was too busy with work! But, finally, I got some time to post something on this. 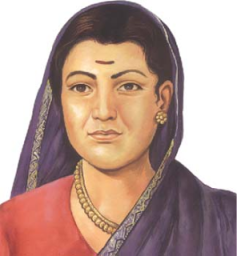 Savitribai Jyotirao Phule (January 3, 1831 – March 10, 1897) was a social reformer, who, along with her husband, Mahatma Jyotirao Phule, played an important role in improving women’s rights in India during the British Rule. They pioneered the campaign for women’s education, starting the first school for girls at Pune in 1848. Savitribai was the first female teacher of the first women’s school in India and also considered as the pioneer of modern Marathi poetry. In 1852 she opened a school for Untouchable girls. Stones would be thrown at her and she would be orally abused but still she continued teaching. When she was hurt, she would be encouraged by her husband, Mahatma Jyotirao Phule.

Savitribai’s poems and other writings are still an inspiration to others. Two books of her poems were published, Kavya Phule in 1934 and Bavan Kashi Subodh Ratnakar in 1982. Recently the Maharashtra government started an award in her name for Women Who Work Social Causes.On March 10, 1998 a stamp was released by Indian post to honour Savitribai’s contribution. Savitribai was a “Vidya Jyoti” for all those who want to do something in the field of education.

A poem by Savitribai on Education:

Be self-reliant, be industrious

All gets lost without knowledge

We become animal without wisdom,

End misery of the oppressed and forsaken,

You´ve got a golden chance to learn

So learn and break the chains of caste.

Throw away the Brahman’s scriptures fast.